and so today i had the "talk" i've been dreading for years. my 9 year old asked me if Santa was real.

my heart sunk. just like when he asked me last year about the tooth fairy. and the Easter bunny before that.

we tell our kids to tell the truth and then we lie to them.

we are not good parents.

but the truth is, we tell these stories because we are good parents. at least we're trying to be. and we want our kids to grow up with a sense of wonder and surprise and joy.

because, let's face it, this world can be cruel. so if we can portray that the world is good through a man in a red suit than so be it. and let's so be it as long as we can.

but as of this morning, i am probably the worst mom in the world. at least it felt that way when i saw his face. 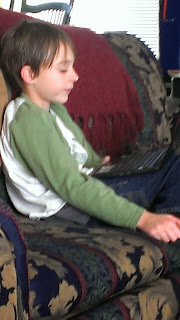 because tommy did not take the news well. and for the next hour he didn't want to talk about it.

but then we read the letter i wrote to him again. this time together. i cried. he cried. and then we hugged.

i'm sad that he has to grow up.

he's sad that he has to grow up.

but we both know that he has to grow up.

and today he did just that.

here's the letter i wrote him right before i broke his heart to answer his question.

I know you want an answer to your question about Santa. You want to know if he is real. If it's really me and Dad who put the presents under the tree. If it was me who wrote Santa's answers last year to the questions you asked in the letter you left for him in the kitchen. You said his writing looked like mine.

And you want to know if we've been lying to you. Because people at school are talking. And some believe in him and some don't and you just want the truth.

Well, the truth is Tommy, is that Santa is real.

But he's not just one person like they portray in all the movies and books about him. Santa is me. And Dad. And the moms and dads of your friends. Santa is in the heart of every boy and girl who ever believed in him and then grew up to become parents of their own.

Sure we say he lives at the North Pole and he has reindeer and he flies all over the world to deliver presents to all the good little boys and girls but that's not the truth. Because the truth is Santa lives in North Carolina. And Nebraska. And Cleveland.

And a thousand other places around the world.

Because Santa isn't a person...he's a feeling.

He's the hope that you feel when you know Christmas is coming and you keep your fingers crossed that he'll stop at our house. It's the generosity you feel when you leave cookies out for him and food for his reindeer ”because they'll get hungry too.” It's the magic of a story that makes you feel that being good should be rewarded and being bad should not.

And though we tell you that you need to be asleep or Santa won't come, the truth is he can be seen everywhere if you look hard enough.

Santa lives in our neighbors who put up their tree in the window and their stockings on the shelf.

Santa lives in your teachers who make ornaments with you and sing Christmas songs.

Santa lives in good deeds and making sure that what we have is shared.

Believing in Santa makes us all, even for a little while, become better people.

And so Dad and I keep the spirit of Santa alive.

Oh Tommy, I have never looked forward to having this conversation with you. Because part of me doesn't want you to grow up. And believing in Santa, the REAL Santa Claus, is one of the last links you have to being little.

But you're not little anymore. You'll always be my baby, but you're growing up. And so I give you the truth about Santa today with a sad but hopeful heart. Because I hope that knowing the truth won't be disappointing but will open a world of wonder that you have never known.

Because today, you become Santa too.

And it's your job to keep the spirit of Santa alive in those who haven't heard the whole story yet.

And never let anyone tell you that Santa isn't real.

Because the spirit of Santa IS real.

It lives in me.

It lives in Dad.

And I hope it will always live in you.

I love you forever Tommy.

And that's the truth.

Email ThisBlogThis!Share to TwitterShare to FacebookShare to Pinterest
Labels: Santa